If a dipole antenna is fed with a coaxial cable from the transceiver, it is always a good idea to use a “BalUn”. BalUn means: Balanced to Unbalanced. This enables us to adapt an unbalanced fed system (coaxial cable) to a balanced antenna system (dipole antenna). The main reason for using a BalUn is to ensure that the coaxial cable does not become part of the antenna system and therefore radiates with it. This has all sorts of nasty effects, think of: interference, EMI, RFI disrupted radiation pattern of the antenna, restless noise level. This last point is because not only does the coax cable’s shield radiate when you transmit, but the shield also works as a receiving antenna.

A ferrite toroid is used, which prevents common mode currents. The main characteristic of a good BalUn is maximum common mode current reduction and minimal loss of the differential current. There is a lot of information on the Internet and even in literature about making a BalUn, but unfortunately there are also a lot of bad designs that hardly work. This design is one that has proven to work very good!

We start by marking and drilling the hole for the coax connector. The diameter of this hole should be 16 mm. This is a large hole and therefore it is easiest to create it with a ‘sheet step drill’. (If you have never heard of that, Google is your friend for looking up what you need) 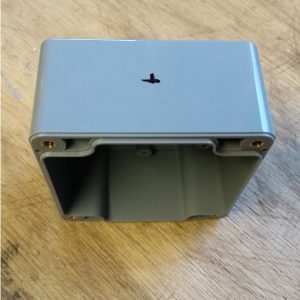 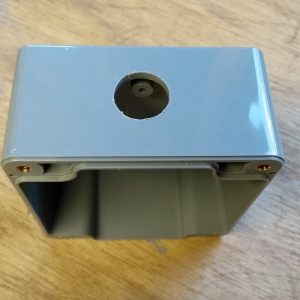 After drilling the 16 mm hole, I placed the chassis part into the hole, to determine the location of the fixing holes. I picked a chassis part where I fix the part with 4 screws, but 2 screws could also work. These holes can be drilled with a 3,5 mm drill. 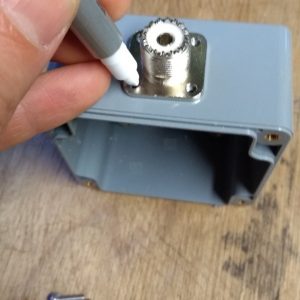 We continue by marking and drilling the holes for the antenna connections and the tensile stools. Especially for longer or permanent antennas it is advisable to use a tensile stool. The hole for the stainless steel eye is drilled with a 6 mm drill and the hole for the antenna connections is drilled with a 5 mm drill. The place where the holes are drilled is to your own liking. 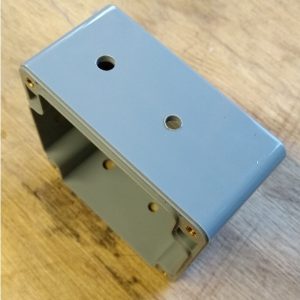 Now it’s time to start the most important part, the toroid! For this antenna we will work with PFTE shielded silver plated copper wire, which is included in the DIY kit. The advantage of this PTFE shielded wire is that it is relatively thin, so the windings make maximum contact with the ferrite toroid and to each other. Now there are also other alternatives, but they don’t have this excellent insulation value (600-1000 Volt) and temperature properties of up to 200 degrees. 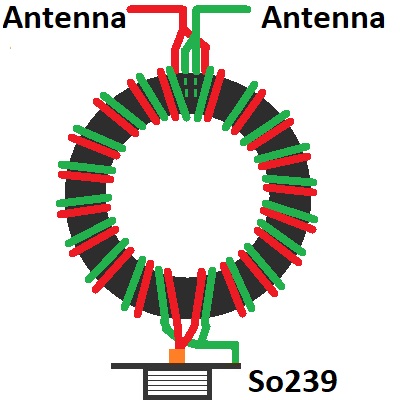 We start by securing two wires with the use of a cable tie. This makes it a lot easier. Then wrap the first 10 windings on half of the toroid as shown in the pictures below. Make sure that the windings are tightly placed together, because the space at this toroid is limited. Then wrap 10 windings on the second half. Note that the wires are wrapped exactly as in the example. Do not change colors or wrapping directions. At the bottom of the ring core are now the two red wires next to each other and the white wires on the outside. At the top of the ring core, this is exactly the other way around, there are the white wires next to each other in the middle and the red wires on the outside. If this is not correct, start again because then something went wrong. 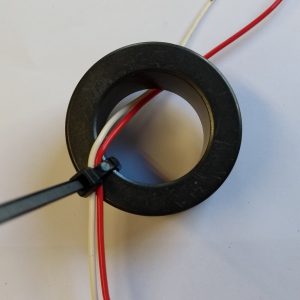 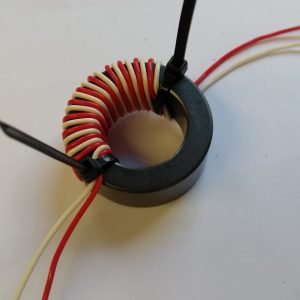 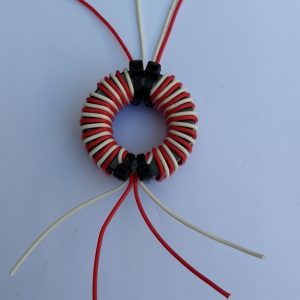 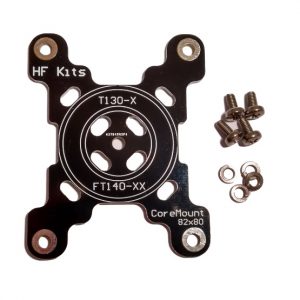 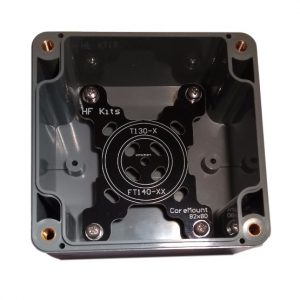 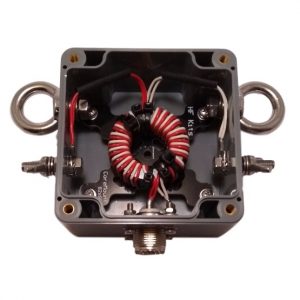 Connect the primary side of the ring core (bottom, where the red wires are next to each other) to the coax connector. The two red wires at the center pin of the coax connector and the white wires on the chassis part with a cable lug. Remove the plastic parts from the cable shoe so that a solid solder connection can be made. now connect the other side of the  BalUn to the connectors for the wire antenna. The two red wires to one side and the two white cables to the other side. Use the supplied M5 cable lug. Use the included toothed spring rings above and below the M5 cable lug, so the bolt will not rotate when you connect an antenna wire. These toothed spring rings are both mounted inside the enclosure. Place a flat washer on the outside and then attach a M5 nut. The pictures below have not yet been fitted with a toroid mounting plate. 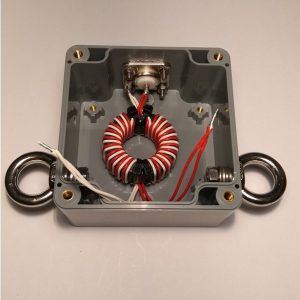 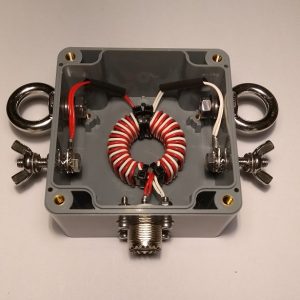 The impedance transformer can possibly be tested by putting a resistor of approximately 50 Ohm (e.g. 47 ohm) over the two dipole connectors. In this way the SWR meter should show a standing wave ratio of about 1:1.5 or lower Testing with a half-wavelength wire (in case of a dipole twice a quarter wave) is of course also a good alternative!

There are many antenna variants possible with a 1:1 BalUn. Of course, the antenna should have an impedance of approximately 50 ohms in the fed point. It is easily to create a single band dipole antenna. There are also multi-band variants to be devised. This can be done by connecting multiple dipole antennas to the same feed point (cat’s whisker). It is also possible to choose for traps or coils, or even a combination of previously mentioned possibilities.

If two wires of each a quarter wavelength are connected to the BalUn, a single band antenna is made of a half wavelength in total.

The wavelength and antenna length can be found in the table below, but can also be calculated by using the following formula:

In this formula λ   is the wavelength in meters, u the light velocity in meters per second, and f the frequency in Hertz. The following example determines the wavelength of the 20 meter band. The frequency of 14.1 MHz is used in this case. First, some zeros are striped away against each other.

We have now calculated the full wavelength. To get a quarter wave, the result must be divided by 4. To get a half wavelength, the result must be divided by two. Antenna wire always has a certain shortening factor. This depends on the conductive material, the diameter and the isolation. Generally the shortening factor will be about 95%. So the total length of our 20 meter dipole antenna (half wave) will be calculated as follows:

Note that the shortening factor of the wire is not included in the table. So the antenna will be about 5% shorter in reality.

Place the complete cat’s whisker dipole antenna with some extra wire length at the desired spot. Always start by tailoring the longest dipole for the lower frequencies. Always remember: don’t cut too enthusiastic.    If the longest dipole shows an acceptable SWR on average, it can be started to tailor the short dipole. In practice, the antenna will be slightly shorter than a single band dipole. Always make sure you cut the same length of both sides to keep the antenna symmetrical.

By applying coils in the dipole antenna something special happens. Because the coil for the higher frequencies is a high impedance, the last piece of wire (after the coils) does not count for this higher frequencies. The total antenna including coils only participates for the lower frequencies. In the case of the 20 and 40 meter band variant, the piece of 10.1 meters of wire works for the 20 meter band. The entire antenna is mechanically 13 meters long but for the 40 meter band, the antenna including coil has an electric length of 20 mtr. This means it creates a half wave length for the 40 meter band. A disadvantage of working with shortened antennas is the limited bandwidth on the low frequency bands. 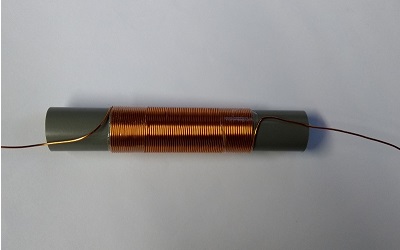 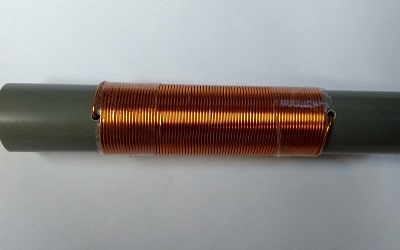 Try to wrap the coil as tight as possible, so there will not be any space left between the windings. Then fix the entire piece with some tape. Continue by drilling two small holes, right next to the coil, where you can stick the ends of the wire in. 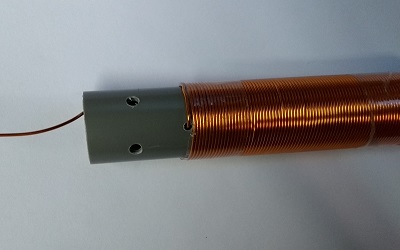 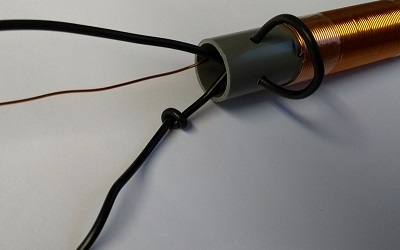 The next step is to drill two more holes as shown in the photo above. These holes will be used to put the wire through, which will be used as the strain relief. Finish this step by tying a knot in the wire and pulling it tight. 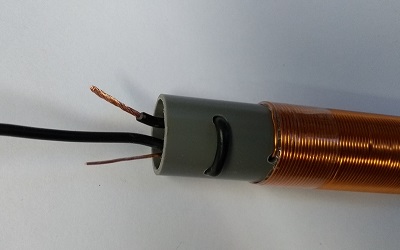 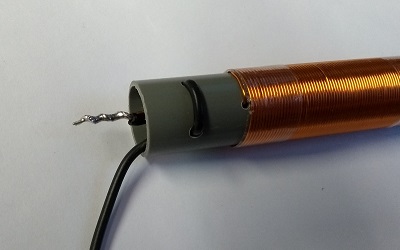 The excess wire can be cut off from the winding wire and the antenna wire. Leave just enough so there will be enough material for soldering. Make sure that the winding wire is completely stripped of the enamel layer. This can easily be done with a sharp knife or some sandpaper. Now solder the wire to the coil and put this into the pipe. 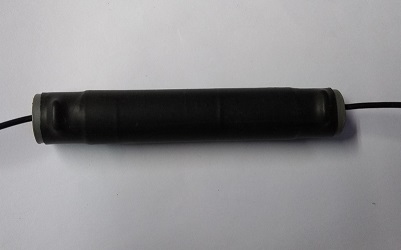 Place the complete dipole antenna with some extra wire length at the desired spot. The first step is to then tailor the wire for the higher frequencies. These are the wires directly connected to the BalUn. Always remember: don’t cut too enthusiastic.    If the upper band shows an average of an acceptable SWR, it can be started to tailor the pieces of wire after the coils. Always make sure you cut the same length of both sides to keep the antenna symmetrical.

The BalUn and impedance transformer What about exactly? (Dutch)